It’s that time of year again when Autodesk start to release all the new 2017 software, and a very interesting release for Revit 2017. The first most significant change is the discontinuation of the singular discipline Revit software such as Revit Architecture, Revit Structure and Revit MEP; these are now replaced with Revit 2017 which contains all three products in one ‘box’. The application icon will now simply read Revit 2017 as shown below. Notice that the logos have also had a makeover!

In this review I will just focus on the structural changes that have happened in Revit 2017 which I have broken down into the following:

Let’s start with the new features for reinforcement features which are very significant in this release! The first feature to look at is varying range rebar. You can now easily add rebar to tapered beams and also to cranked slabs.

You will notice that the structural rebar now has a new Rebar Set type for Varying Rebar. This can be used in all sorts of situations where the bar is not parallel to a particular surface or face.

The varying range bar can also be detailed and scheduled as shown below. The varying bars can be called up separately or with a ‘sub mark’ such as letters or numbers. These options can be set within the reinforcement settings.

Next up are the new reinforcement bar couplers which add not just couplers but also anchors and any product which aids the continuity of concrete systems. The rebar couplers have a new category and can also have a 2D symbolic representation as well as a 3D model.

The couplers will attach to reinforcement bar that matches the bar diameters and can also be added to rebar ranges and also scheduled.

Bent fabric is now incorporated within this release and can be simply sketched onto any element that can host rebar.

A small new feature is now the ability to attach a structural column to an isolated foundation. This can be useful if you have situations where the foundations are changing level as the columns automatically lengthen or shorten based on the moves. If a concrete column is attached to the foundation then these elements will become monolithic.

Columns can now be split which again is very useful for situations where a column has been modelled through many different levels and then requires section changes as the design progresses. Another use is for analysis where nodes are required at floor plates.

Revit 2017 now adds 22 structural connection types into the product which are directly taken from the Autodesk Advance Steel product. This is obviously a very big improvement as many structural consultants will not directly design connections but want to show design intent within a steel frame to communicate better with the client and the fabricators. Another advantage is that early design coordination can now be realised by modelling items such as haunches and gusset plates that could cause clashes with other elements. 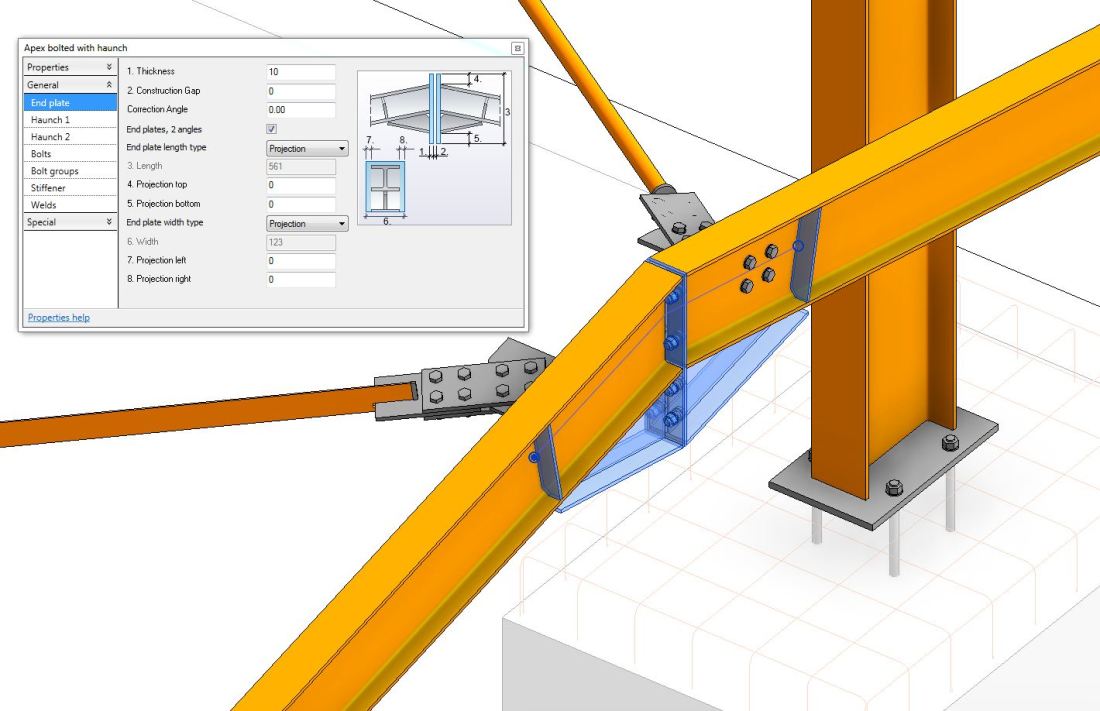 The connections can be designed to EC3 and will directly take design loads from the results of an analysis that are stored within Revit.

At present you cannot create fabrication drawings from the various members and plates but this could be a direction that Autodesk move into in the future. At present Revit is not very good at dealing with small elements so perhaps this is a little way off into the future.

Coordination with connection holding down bolts and anchors with reinforcement.

Click the below link for a full video review.