Yet again it is time for the mid-year update to Revit 2017, this year Autodesk have changed the naming of the update to a point release which makes a lot more sense to most users. Previous releases have been marked as R2 which could also have a file format change which can cause issues when working on collaborative projects requiring a consistent platform. This release does not change the file format and also incorporates Service Pack 1 and 2.

Currently the Dynamo Script must be a stand-alone utility that can be run with no inputs required from the end user which is quite limiting. For example, if you are required to enter a dimension or pick an entity then this is currently not possible.

Below you can see the Dynamo Player displaying the Dynamo (.dyn) files in the selected folder. The user then simply selects the play icon to run the script. 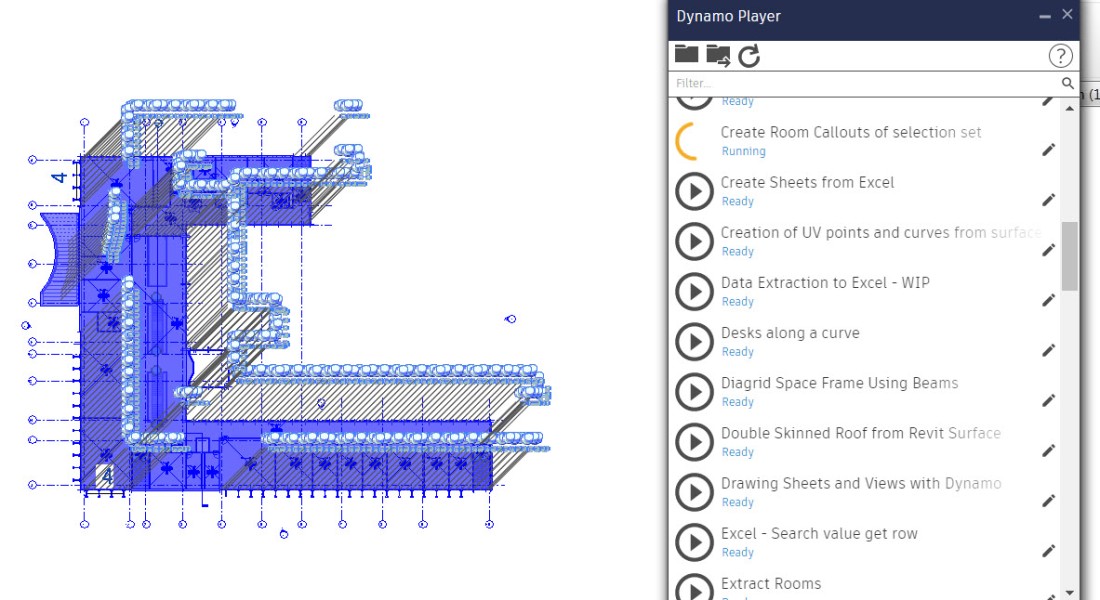 This is obviously the first iteration of Dynamo Player concept and I am sure as this develops that an Interface will be created for adding inputs into the dynamo script. For example, Autodesk FormIt will allow interaction with Dynamo to create conceptual forms. Slider bars and input boxes are created to enable an interactive environment.

Below is an example of the Dynamo Customizer to publish a script to a web page. This is perhaps what Dynamo Player may look like in future releases.

A small structural enhancement is the ability to split structural framing and structural columns with the conventional split command and retain setting out positions of openings. Previously the openings may have shifted position.

In the below example the beam has been split and the circular openings have retained setting out positions. The same is true for the structural column. 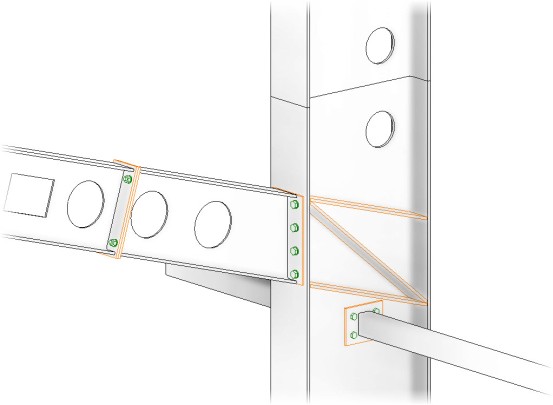 Revit 2017.1 now has the ability to directly import a Rhino (.3dm) file into either a Revit Project or a Revit Family. You can also assign a category to the import but there are limitations. Below is the amended Import CAD format dialog box showing the direct 3dm import and category selection. 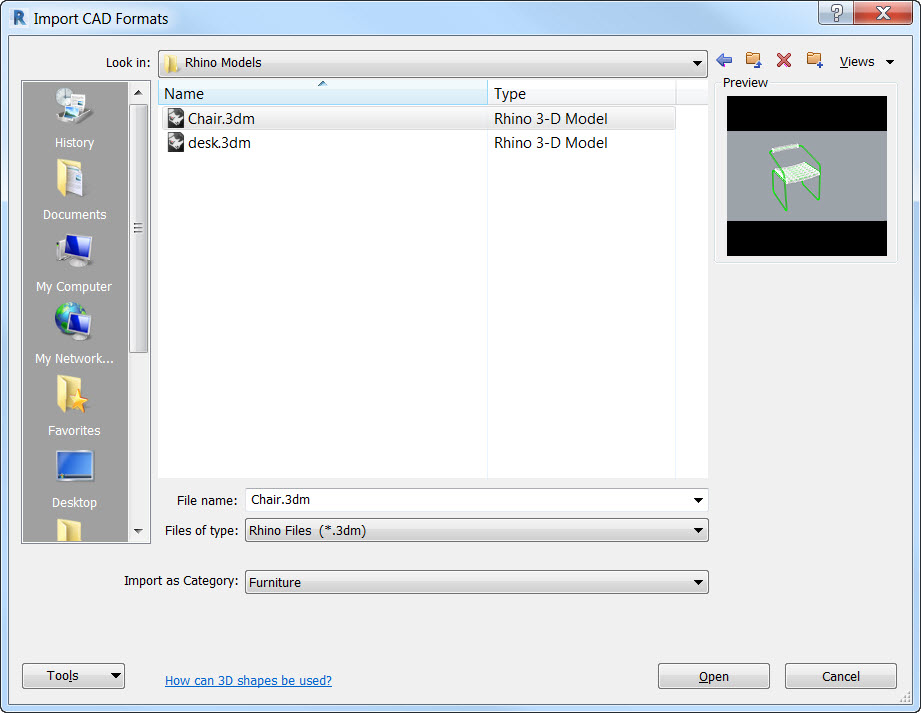 The imported object cannot be re scaled in Revit so you can only import objects of the correct scale. The import cannot be partially exploded to remove small/unwanted details.

On both my test models some of the elements did not import. 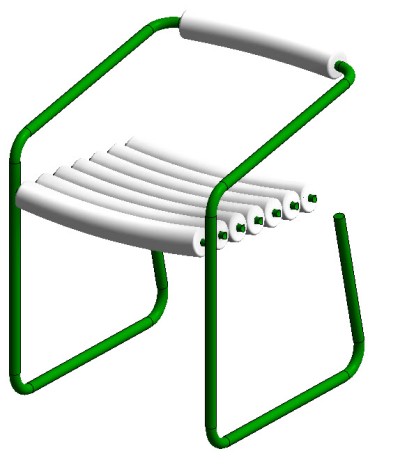 This is a nice addition and will improve but in my opinion Dynamo is still the best method at present to import and work with native Rhino geometry.

Some other additions are platform for the repair of Central Files. I have not tested this at present but will update the post when I have some test results.

In summery the point release has not had as much new functionality as previous releases and perhaps should be seen as more of a service pack.

Hope this has been useful,

Even though the majority of users are now firmly engrained with Autodesk Revit software we still have to rely on AutoCAD for things such as Architects drawings, surveys and sometimes to interface with our favourite structural analysis software not currently integrated with Revit. Rather than recreating this data we can simply reuse this by reading BIM data from AutoCAD! So what is this BIM data from AutoCAD I hear you ask! In the case of a survey you have a wealth of information that you perhaps didn’t realise. The below Revit Survey was created entirely from the AutoCAD 2D survey. Note that some of the points may be slightly inaccurate due to the position of the text but still better that no 3D survey!

Let’s take a look at the example below. Here you can see a typical 2D AutoCAD drawing representing a survey. We have the levels, information relating to trees, concrete bases, survey pins as well as areas of water. Of course this information could simply be linked into a Revit model as a 2D drawing but we would be losing quite a bit of information if we took this approach.

If you LIST or review the Properties of an AutoCAD object in a drawing such as a tree this is quite likely to be a Block. The block often contains attributes that we can utilise in Revit as BIM data. In the below example I have selected a tree. The Properties that I have highlighted are going to be used to recreate these trees. Notice that the canopy dimensions are controlled by the Scale; this is a fairly common practice.

I have then typed the command EATTEXT (Enhanced Attribute Extraction) which will allow the end user to select the relevant properties and attribute values and write these out as a Microsoft Excel file.

Here is the Dialog that allows the selection of an entity or block. In this case I am extracting the block , PTS-047 which are the trees 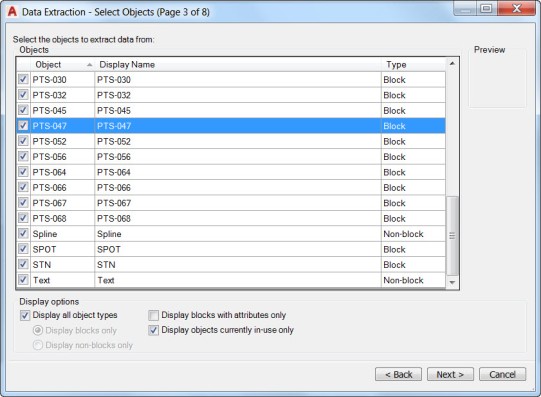 I then select the relevant information that I require. In this case the Position (X,Y) and the scale (This is the canopy diameter) and the attributes.

Here is the preview of the data prior to saving as a Microsoft Excel file. In this dialog you can drag the columns to new positions and suppress items such as name and count. 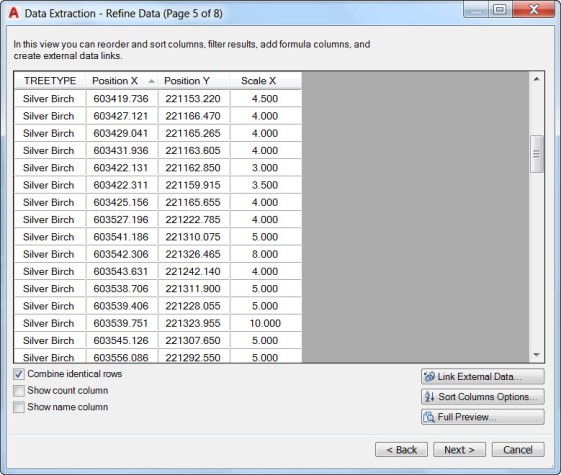 The data is now written to the Microsoft Excel file so that Revit and Dynamo can read this data and create the relevant objects.

In a similar way you can extract the text for the Level data and build a topographic surface in Revit. In the below image you can see the insertion point of the text as well as the Contents which will become the Z level. The trees are then placed as families which will automatically ‘sit’ on top of the topography.

Here is the Dynamo Script to get the Topographic points from AutoCAD and create topography in Revit. It is worth noting that for those of you that have access to AutoCAD Civil 3D this can be achieved automatically. Note that I have split the image into two so that I could fit it on the screen!

Here is the resulting Topographic surface in Revit.

And here is the finished Topo with trees, slabs and sub regions imported.

This workflow can be used for all manner of tasks. I do plan to create a full video tutorial if there is enough interest from the community?

Hope this is interesting,